Saturday Erin and I hiked up Mission Peak, something we’ve both wanted to do for a long time. It’s about 6 miles round trip on an out and back hike, with about 2000′ of elevation gain. The trail is mostly fire road, with a smaller path near the peak, and lots of people were out enjoying themselves. Along the way we say lots of ground squirrels? 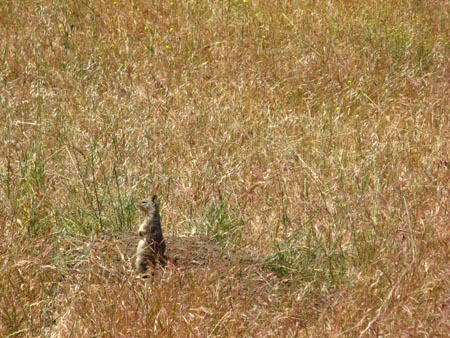 There was a strong Bay breeze and it was uncomfortably cold at the top, so we ate our trail mix quickly and headed back down. This picture is a very cool orientation post that has 3/4″ pipes welded into it. Originally the pipes were numbered and there were plaques describing what was to be seen through each hole. Unfortunately vandals have removed almost all the numbers so you’ve got to guess. It’s a really cool idea for a summit attraction though.